After the October revolution in Russia a new stage started in the life of Azerbaijan – the period of national morale and national revival of Azerbaijani people. The history of the present money market and money turnover of the modern Azerbaijan started just from that period, with the paper moneys issued by the Baku Municipality after a hundred-year recess.

Small changes in paper form with denominations of 5, 15, 50 qepiks and 1, 3, 5, 10, 25-manat bank notes put into circulation in January-April of 1918, differed from each other in the color and dimensions.

On April 25, 1918 the power in Baku was transferred to Bolshevik faction and soon after the new governing body - Council of Baku Municipal Economy was established. By the decision of this Council new paper banknotes were issued and put into circulation in haste. The emission of the banknotes with denominations of 10, 25 and 50 manat was affirmed by People’s Commissar N. Narimanov’s signature. In spite of the fact that the issue of those bank notes was stopped after the resignation of Bolsheviks of Baku Commune on July 31, 1918, they were used by the people as circulating capital in 1918-1919 years.

Some copies of the banknotes in denomination of 100 manat belonged to the first paper money emission put into operation in the early 1919 by the government of the Azerbaijan Democratic Republic, 25 manat (in 1-7 series) issued in the mid of the same year, 50 manat (in 1-11 series), 100 manat (in 1-8 series), 250 manat (in 1-7 series) and the copies of the biggest currency put into circulation in the early 1920 – 500 manat (in 1-4 series) are kept in the Azerbaijan State Museum of History. The title of the banknotes – state currency was denoted with the term “manat” in Azerbaijani language, “ruble” in Russian and on the 500-rouble banknotes - in French too. There was Russian inscription “Азербайджанская Республика” on manats and French inscription “Republique d'Azerbaidjan” on 500-ruble bank notes.

The State bank was reposed by the authority for emission of the banknotes. The total sum of the banknotes and coins issued in the time of the Azerbaijan Democratic Republic was 2 billion 345 million rubles.

The banknotes issued in 1919-1920 years were named manat in Azerbaijani and ruble in Russian. The main purpose was to gain the population’s trust to the new national currency, accustomed to the paper money used in Russia for many years. The economic policy of the Azerbaijan Republic in this sphere was organically linked with recognition of the national currency – manat at international level. Just for that reason and counting on support of France government, (partially considering the role of French as international language at that time) the Azerbaijan Democratic Republic deemed necessary to denote the 500-manat banknotes in French.

On August 20, 1919, with the permission of the government of the Azerbaijan Democratic Republic, Baku Municipality had issued a hundred thousand units of 500 manat and fifty million manat’s worth of lottery loans divided into two thousand series. The excerpt from the Law on the lottery loans - the amount of prize fund, the rules and the term (1920-1972) of the winning were described on the tickets.

As a result of the breakup of the Azerbaijan Democratic Republic on April 28, 1920, the existed monetary and credit system of the state was also disrupted. 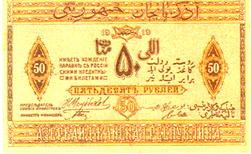